For three consecutive years, Bridge pupils have scored top marks above the national average in the national common entrance examination, an indication of the academic excellence at Bridge community schools and further evidence that Bridge provides a strong education to the Nigerian children.

10-year-old Christopher Inyanda, from Bridge Aderenle Academy in Alimosho scored an outstanding 195 out of 200, placing him among the best performing pupils in the competitive national examination in the country. Christopher, who hopes to become a pilot in the future noted that he is grateful for the support he received from his parents and teachers and attributes the remarkable performance to the best teaching received at Bridge.

The best performing female pupil, Fiyinfoluwa Omole, a 10-year-old pupil from Bridge Hossanah Academy in Badagry, Fiyinfoluwa scored an incredible 191 out of 200. She acknowledged the efforts of her favourite teacher, Mr. Richard Akinyomi who ensured that she understood all that she was taught in the classroom.

“I am so proud of my success and my parents are really excited! I worked really hard and got a lot of help from my teachers in preparing for the exams which made me confident that I would do well.” She said. 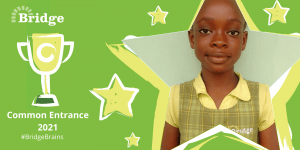 Commenting on the results, the Regional Director of Academics, Rhoda Odigboh said,

“Knowing that we are supporting children to excel in our country inspires those working at Bridge each and every day. Now, with three years of successful results we are confident that what we are doing in the underserved communities of Lagos and Osun States is working, and this motivates us to work even harder and impact more children. A good education will give children the opportunity to change their future and hopefully the future of the community and Nigeria at large. Every child deserves that.”

The results show that the length of time a child spends in a Bridge school has a significant impact on their performance. Pupils who have been at Bridge for three or more years emerged among the top performers in the country.

The National  Common Entrance Examination is eligible for pupils in their final grade of primary school year. Through the examination, the best candidates from every state of the federation and the federal Capital territory (FCT) for admission into federal Unity colleges. 2019 was the first year that Bridge registered pupils for the National Common Entrance Exam; with the pupils performing extremely well.

Bridge’s performance in the common entrance has been widely reported in major newspapers like Vanguard, ThisDay, BusinessDay and Sun